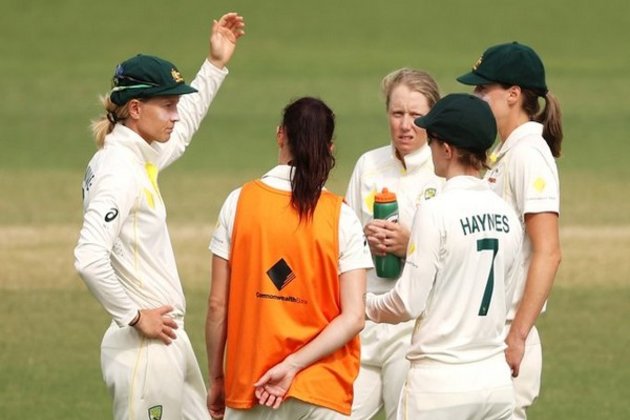 Canberra [Australia], January 30 (ANI): The one-off Test between Australia and England in the Women’s Ashes ended as a draw here at the Manuka Oval on Sunday. The hosts fell just one wicket short of bowling out England in the fourth innings while the visitors fell 12-run short of chasing down a record total.

Chasing 257, England got off to a decent start as openers Lauren Winfield Hill and Tammy Beaumont put on 52 runs for the first wicket. However, as soon as the visitors started to gain an upper hand, Australia got the wicket of Beaumont (36) through Tahlia McGrath. The second-wicket stand of 42 runs for the second wicket came to an end in the 22nd over as Ellyse Perry got the better off Winfield Hill (33) and England was reduced to 94/2.

Heather Knight and Nat Sciver then got together at the crease and the duo scored briskly, and as a result, the match was nicely poised with England needing 104 runs to win in 17 overs. Darcie Brown provided the much-needed breakthrough of Knight (48) and this ended the 72-run partnership for the third wicket.

Sciver (58) and Sophia Dunkley (45) were going great guns, but after the dismissal of Sciver, England’s innings derailed and England was quickly reduced to 244/9 in the 46th over. In the end, Kate Cross and Sophie Ecclestone ensured that England does not lose the final wicket and the match ends in a draw.

Earlier, resuming Day 4 at 12/2 with a lead of 52, overnight batters Ellyse Perry and Beth Mooney added 91 runs more to the total and the stand saw Mooney going past the 50-run mark. The stand was finally broken by Sophie Ecclestone in the 34th over as she dismissed Perry (41).

Soon after, Beth Mooney (63) was sent back to the pavilion by Charlotte Dean while Meg Lanning (12) was dismissed by Katherine Brunt and as a result, Australia was reduced to 130/5 in the 45th over with the hosts’ lead being 170. Tahlia McGrath and Ashleigh Gardner then put on a 48-run stand for the sixth wicket, and this saw Australia’s lead going past the 200-run mark.

Gardner was dismissed after playing a 38-run knock while McGrath scored 34. In the end, Australia declared their second innings at 216/7, with a lead of 256, setting England a target of 257 in 48 overs.