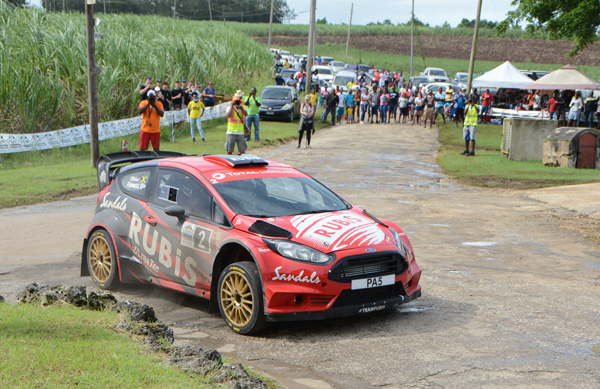 Jamaica’s Jeff Panton is the number one seed for today’s Barbados Rally Club (BRC) Double-Header Sprint at Bushy Park, St Philip, which will run behind closed doors, in line with current Covid-19 directives.

Driving the Ford Fiesta WRC in which he finished third in Sol Rally Barbados 2020, he heads the 30-strong running order, with a record-breaking entry of nine in the FIA R5 class including Zane Maloney, on a break from his Formula Regional campaign in Europe.

Sol Rally Barbados 2019 winner Dane Skeete starts at 2 in his Subaru Impreza WRC S12, ahead of multiple circuit racing Champion Mark Maloney in a Skoda Fabia R5, sharing with nephew Zane, who will start further down the order. Andrew Mallalieu is seeded at 4, sharing his Ford Fiesta R5 with son Adam, while Roger Hill (Fabia R5) starts at 5, ahead of Stuart Maloney, who will debut his new Fabia Rally2 Evo.

The Turks & Caicos Rally Team will be represented by Paul Horton (Fiesta R5) and Stan Hartling, who will finally get a chance to compete in his Fiesta R5, which arrived in the island last year but sat unused as the Covid-19 pandemic took hold. Ahmed Esuf will complete the R5 class, driving brother Suleman’s Fiesta in competition for the first time.

Other news of note includes the debut of the BMW 1M recently added to the Esuf family stable, with Sol driving, and newly-confirmed Rally Club Chairman and former Champion Driver Geoff Noel returning to BRC action with a Toyota Corolla.

Other circuit racers familiar with Bushy Park include former BPMSI Class Champions Ross Callender and Tremaine Forde-Catwell, each driving a Daihatsu Charmant, while all-rounder Derek Edwards, who won BPMSI Group 1/Class 2 in 2017 and then the Caribbean BimmaCup the following year, heads no fewer than six of the BMW hatchbacks in Clubman 2, including last year’s class Champion Jason Downey.

With strict Covid-19 protocols in place and only essential personnel permitted entry, scrutineering was held yesterday in the Pits at Bushy Park, with a two-hour test session starting at 8.00 a.m. today on the International Circuit, after which an hour has been set aside for the organisers to set up the stage.

Event One is slated for an 11.30 a.m. sharp from the north-west corner of the facility, close to the start pad used by the Barbados Association of Dragsters & Drifters (BADD), and covering around three kilometres, using sections of the International Circuit, the kart links and the Rallycross Bridge, then finishing in the pit lane. Event Two is scheduled to start at 3.00 p.m., with the course reversed, but a few hundred metres shorter. There will be four runs in each direction, with BRC Championship points awarded separately for each.