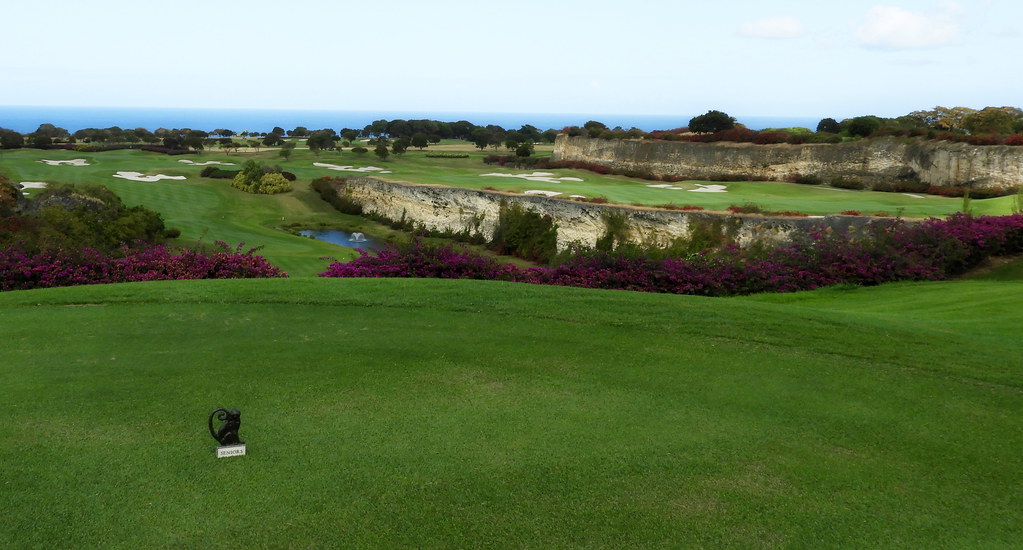 Barbados was under English rule from 1625 until its independence in 1966, one of the few islands in the West Indies that was not bounced from one foreign power to another. Barbados is known as the Little England of the Caribbean. The island is 166 square miles, 21 miles long and 14 miles wide. Barbados was named by Portuguese mariners as the land of bearded fig trees. The Portuguese sailors thought the gnarled, aerial roots of the fig trees looked like beards – thus it was charted in 1536 as Los Barbados or the Bearded Ones.

When the first British arrived in 1627 at present day Holetown, there were no indigenous Arawak around whatsoever. Originally covered by dense forests of bearded fig trees, the island was cleared for use in giant sugar plantations and was known as “Britain’s Sugar Bowl”. Some 26 forts, the remains of which are now sightseeing attractions, protected the plantations from pirates who roamed the Caribbean Sea.

Barbados has averaged about 8.7 hours of bright sunshine each day throughout a typical year. There is no rainy season. A temperature in the high 80’s is considered unusually high. Barbados ocean water temperatures are deliciously warm 79-84 degrees F all year round. Barbados is approximately 1,200 miles from Miami, 2,100 miles from New York City and 300 miles from Venezuela.

In January 1946, at the end of WWII, Ronald Tree visited Barbados to stay at Sir Edward Cunard’s (of the famous shipping family) home Glitter Bay. Ronald Tree, was the grandson of Marshal Field the Chicago department store scion and son of Lambert Tree who served as the Ambassador to Belgium. Ronnie Tree served in the British Parliament for 15 years. Tree was captivated by the island and within twelve months he had bought a piece of coastal land at Porters and built a magnificent home, Heron Bay. Less than ten years later, as the number of his visitors to Heron Bay escalated beyond capacity, he began to realize the enormous potential of Barbados as an exclusive tourist destination. Tree decided to buy the Sandy Lane sugar estate and factory on the St. James coast to build a hotel on what was a 1,000 feet beach front and build a golf course on the remaining land. Thus it was that Tree with a syndicate of wealthy friends designed and built Sandy Lane, a resort that opened in 1961. Beyond the resort, Tree took an interest in Barbados and its problems as it moved from a British dependency to independence in 1966. The British have left their mark on Barbados. The language is English, the sport is cricket, you drive on the left and the island has the highest literacy rate in the Caribbean.

The Sandy Lane Hotel was built of coral stone and surrounded by 380 acres of gardens. It faced a mile long sandy beach and offered billiards and a nine hole golf course – Rockley Beach Golf Club (green fee $2.50). Service and cuisine were carefully directed by a team imported from London’s Claridges Hotel. When the 53-room hotel opened in 1961, Sandy Lane was considered the ultimate in Caribbean resorts. It was an elegant, exquisitely appointed and incredibly expensive jet setter’s getaway spot. The opening rate was $45-50 per day for two including breakfast and dinner. In 1964 the green fee at Sandy Lane Golf Club was $3.25 per person per day. Caddies were available for 80 cents per round. Nicholas Behard, formerly of Claridge’s, was the Sandy Lane manager in early 60’s. Later Behard ran the Intercontinental Hotel in Auckland, New Zealand. Henry C. Petteys was the Manager also in the mid-60’s. Petteys was manager of the Black Point Inn in Maine in the 70’s.

Sandy Lane architects were “Happy” Robertson Ward and locally Jimmy Walker. Happy Ward’s resort projects were designed to harmonize with their settings and were known for their use of coral stone and other natural materials. Robertson earlier designed the Mill Reef Club in Antigua, the Samanna in St. Martin and the Cotton Bay Club in Eleuthera. Said Ward of his design for the neo-Palladian style hotel, “I put myself in the position of a well-educated English gentleman of the late 18th century going to the West Indies to build a Great House.”

The Sandy Lane Hotel legal owner was West Coast Development LTD and had a Canadian director, James A. Gairdner, a Toronto investment dealer. By 1963 Ronald Tree and West Coast Ltd were selling plots on the 378-acre Sandy Lane Estate for residential retirement or holiday homes. The sites at Sandy Lane were selling at $6,000 to $12,000 per acre in 1963. In the 60’s everyone who was anyone came to stay. Aristotle Onassis, Maria Callas, Claudette Colbert, Greta Garbo. David Niven dreamed up cocktails at the bar, and Elton John once adhered to the New Year’s Eve black-tie rule by wearing a bow tie as a garter. Other regulars included Sidney Poitier, Mick Jagger, Princess Margaret, Queen Elizabeth II, and Frank Sinatra.

Ronald Tree sold the Sandy Lane Hotel in 1967 to Trust Houses which owned many of England’s oldest and most famous hotels, including Brown’s, The Cavendish, the Hyde Park Hotel, and the Grosvenor House. By 1970 Trust Houses had merged with Carmine Monforte, later known as Charles Forte. Forte started with a chain of ice cream shops and was the first to contract for food service at Heathrow Airport in 1955. By the mid-60’s he purchase three of the finest hotels in Paris, the George V, Plaza Athenee, and Hotel de la Tremoille. Trust Houses became Trusthouse Forte (THF), then the largest hotel company in the world. Sandy Lane was a special favorite of Trusthouse Forte head Lord Forte, who frequented it often. Guy Macpherson was from 1971-74 the general manager at Sandy Lane Hotel. He later moved to Trust House Forte at its London headquarters.

In 1996 Granada plc was successful with its hostile takeover of THF. In 1997 Granada sold the Sandy Lane for approximately US $50 million to five Irish businessmen, including J. P. McManus, Dermot Desmond and John Magnier. The new owners are affectionately known as the “Coolmore mafia” – Coolmore is where they stable their race horses in Ireland. Dermot Desmond is the chairman of the board.

Due to the wear of over 30 years and several structural problems, the jet setter resort playground of the 60’s was demolished then rebuilt and expanded, in the same neo-Palladian style as the original, complete with its white coral stone rotunda – albeit larger and even more luxurious. At the peak of construction, 1,400 people from 40 countries worked on the site. In March 2001 the hotel reopened.

The new Sandy Lane modus operandi was to spare no expense in the drive to be unrivaled. General Manager Colm Hannon was quoted – “The budget went out the window very early in the project.” During the 3 year closure the old building was knocked down and then put back up, right down to the rusticated archways and distinctive roofline cornices – but with a level of luxury intended to put Sandy Lane on a par with the world’s, not just the Caribbean’s, top resorts. Dermot Desmond cherry-picked the world’s top hotels and resorts for ideas. Taking a cue from a hotel in Dubai he had tunnels dug beneath the buildings for the housekeeping and room-service carts so guests wouldn’t see (or hear) them trundling down the halls. He went through mock-up room after mock-up room. Sandy Lane has perhaps the most beautiful and luxurious guest rooms in the Caribbean. Desmond had to be sold on the spa–it wasn’t part of the original plan–but when he bought in, he did so in characteristic fashion: “Build the best spa in the Caribbean,” he told interior designer Fiona Thompson. Thompson (principal with Richmond International) was also the lead interior designer for the Moscow Four Seasons, Shangri-La Singapore and the Langham in London. Desmond built the largest spa in the Caribbean, a 47,000-square-foot building with a Las Vegasy faux waterfall in front that flows into the 7,500-square-foot resort pool. When the hotel re-opened in 2001 it was said up to 50% of the passengers on the Concorde flights from London were transported to the Sandy Lane. The Concorde’s last flight to Barbados was on November 17th 2003.

The plan to cover the costs of the 112-room resort was to sell 110 vacant lots surrounding the resort and golf courses with price tags of around US $3 million each. The sites would include membership in the Tom Fazio-designed private golf club, the Green Monkey. US $25 million went into the Green Monkey’s construction. Carved out of an abandoned coral quarry and flanked by mature mahogany trees, the Green Monkey is all about dramatic changes in elevation. The ninth hole par five has a 100-foot drop to the green on your third shot. The super exclusive Green Monkey golf course has a separate apparel line that can only be purchased after completion of a round of golf at $450 each. The course is named from one of Barbados’ most famous residents – the green monkey. The green monkey was initially brought over to Barbados as a pet from regions of West Africa during the slave trade over 350 years ago. Many monkeys then escaped or were released and became ‘naturalized’ in Barbados.

The original 18-hole course built in 1961 was reduced in size to a nine-hole layout known as The Old Nine and nicknamed “Tough Augusta.” The par-36 course is known for its postage-stamp greens and tight tree-lined fairways. Part of the reclaimed original course was then reshaped into the new Country Club Course, an 18-hole Tom Fazio track that, unlike the Green Monkey, welcomes the general public. The 7,060 yard Country Club Course incorporates five lakes and grand vistas of the turquoise Caribbean. It is said you could steer the Queen Mary through the ultra wide fairways. This is resort golf so the intention is to make guests happy about golf. The scorecard cleverly names each of the five tee blocks: Ability, 7060 yards; Hope, 6542 yards; Humility, 6107 yards; Respect, 5661 yards and Reality, 5089.

On October 5, 2004, golfer Tiger Woods married his Swedish fiancée Elin Nordegren on Sandy Lane’s Green Monkey golf course. The rock group Hootie and the Blowfish performed under a tent located on the course. Woods and Dermot Desmond are friends – Desmond paid at auction in 2000 $1.5 million just to get Woods to sign a flag from Pebble Beach where he won the U.S. Open. On a side-note the Sandy Lane owners ( Coolmore) purchased a 2 year old colt at auction in 2006 for $16 million. They named the horse Green Monkey, after their golf course. At the time Green Monkey was the most expensive thoroughbred racehorse ever purchased. The horse retired with total earnings of $10,440 and was euthanized at the age of 14.

Colm Hannon was the General Manager at Sandy Lane for 8 1/2 years starting in 1996. Hannon ran the property as it went through the 3 year closure and re-opening. Hannon is a graduate of Shannon College of Hotel Management in Ireland. Sandy Lane’s co-owner, JP McManus, moved Hannon to the West Coast of Ireland to be the CEO of Adare Manor, a five star castle hotel and golf course.

Robert Logan was Sandy Lane’s general manager from 2008-2012. He previously was General Manager of Raffles Hotel, Singapore and currently is the General Manager for the One&Only Palmilla in Los Cabos, Mexico,

Randall Wilkie was named the new General Manager of Sandy Lane Barbados in 2012. Previously his was General Manager at Cobblers Cove Hotel in Barbados. Wilkie maintains a staff of around 700 for the 113 rooms.

The BMS says heavy rains to continue into weekend