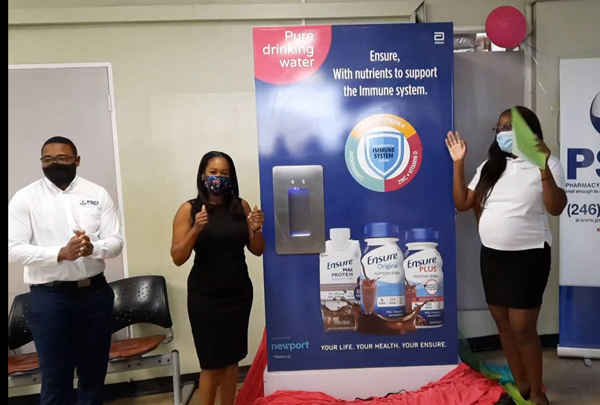 The Queen Elizabeth Hospital became the latest point on the island where members of the public can access fresh, free drinking water as Newport unveiled their most recent hydration station in the Hydrate Barbados Programme. With eight locations across the island offering purified, cold and room temperature water at no cost, the company is well on its way.

The station was officially opened yesterday in the lobby of the hospital’s main entrance and Marketing Executive at Newport Alicia Barrow said that the event was made even more special as the company reached the milestone of 100 000 bottle-fills this week. Also noting that the Hydrate Barbados programme continued to fulfill its mandate despite the restrictive climate brought on by the global pandemic, Barrow said that the company is doing its part to aid the environment and the island’s healthcare framework.

“Though one of the aims of the Hydrate Barbados programme is to protect the environment by reducing the plastic pollution, we have recognised that us and our partners can and have made a major impact in encouraging Barbadians to foster healthier habits. We realised that by providing the easier choice of free water compared to the sugar-sweetened beverages, than nine out of ten times, people will choose the healthier choice of water. Just this past week, we have heard a renewed call to combat the rising rate of non-communicable diseases in our island.”

“Our bodies are made up of 70% water, which means we all should be drinking more water. We are happy to support Barbados in the drive to reduce sugar in our diets and consume more water. We want to thank the QEH and Newport for allowing us to be a part, to come together as corporate Barbados and the public sector to continue the drive towards a healthier nation,” he said.

Director of Engineering Services at the hospital Paula Agbowu said that the project was a long time in coming and that the hospital recognised the importance of having water readily available for everyone.

“We are truly happy and thankful that Newport would have engaged in this initiative and asked us to partner with them to be able to be a part of this exercise. We are also happy to know that this will be a station that will not negatively impact the environment because persons will be able to bring their own refillable, reusable containers so that we will reduce the plastic waste that would be going to the environment. We also are glad that we will have the access to water on an everyday and routine and regular basis so that persons that are traversing this area can have access to this facility,” she said, adding that she hopes for future partnerships which would see stations at more locations in the hospital.