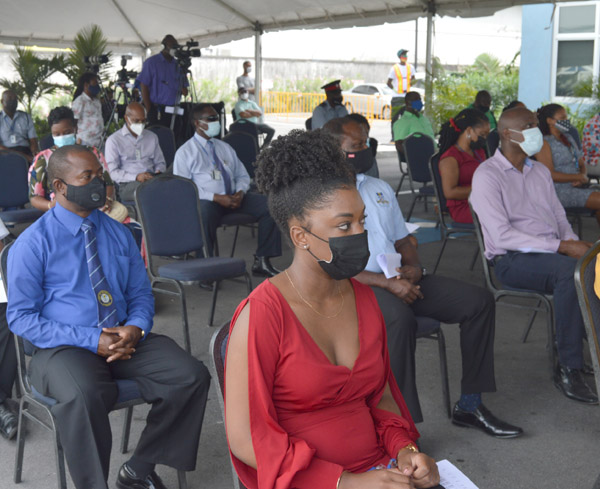 This was revealed during the 60th anniversary celebration and time capsule ceremony at Cube Blue, Harbour Road, St. Michael on Tuesday.

“Our growth and expansion continues, buoyed by a stream of new and emerging demands and the ever-growing number and size of ships. Our efforts right now are being concentrated on major infrastructure projects aimed at either expanding the current revenues or creating new earning opportunities,” said Jean-Marie.

History of the Barbados Port Inc

During his remarks, BPI CEO gave a brief history of the Barbados Port Inc. He told the audience that on May 6, 1961, the Deep Water Harbour – now known as the Port of Bridgetown – was officially opened by Sir Grantley Adams, then Prime Minister of the West Indies Federation. Until the Deep Water Harbour was built, the larger ships calling at Barbados anchored in Carlisle Bay. Cargo and passengers were transported to the Wharf at the Careenage in smaller boats, an activity which according to the 1961 Port Department Annual Report, sometimes resulted in the unfortunate loss of cargo.

The construction of the Deep Water Harbour, which cost $28 million, started in June 1957. This resulted in the incorporation of Pelican Island along with 90 acres of land.

“The final stone block in the breakwater at the Bridgetown Harbour was laid on July 23, 1960, by Premier of Barbados, Dr. Hugh Cummins.

On February 12, 1961, the tug “Pelican” arrived in Barbados from England, crossing the Atlantic on its own power. The stage was finally set for bulk sugar exports to commence. Barbados’ first exports were recorded on March 10, 1961 when the S.S Diplomat entered the new Deep Water Harbour and safely berthed under the Sugar Loading Towers,” said Jean-Marie.

The BPI has also expanded over the years. Jean-Marie noted in 1978, there was the first major upgrade of the Port since its opening in 1961. This project was in preparation for the changing mode of shipping from break-bulk to containerised cargo.

In 2002, the harbour was dredged to 11.6 metres resulting in the reclamation of an additional nine acres of land to accommodate newer mega ships. That same year, the Adventure of the Seas – then the largest cruise ship – made its inaugural call at the Port. Two years later in 2004, the Queen Mary II, the largest cruise liner at that time, visited Bridgetown on its maiden voyage. In 2020, the Symphony of the Seas, the world’s largest cruise ship, came to Barbados as part of the massive repatriation of passengers and crew precipitated by the onset of COVID-19.

Since its expansion, the BPI management and the government of Barbados are focused on projects that facilitate growth. The Chairman of the Barbados Port Inc, Peter Odle, noted some of the plans in his speech.

“We have mapped out the pathway for deeper integration into the upstream and downstream services associated with a major Port. We have created a new vision and taken on a new mission. We have revised the business model and begun to look at new business opportunities and partnerships – local, regional and global – which will position the Port to emerge as a Southern Caribbean logistics and transshipment hub.

“The team at Barbados Port Inc. is embracing digitisation, innovation and energy transition in pursuit of advanced technological ecosystems and sustainability in every aspect of operation. New initiatives [are] being undertaken, primarily to enhance logistics processes and port infrastructure. One of our primary goals is to provide high levels of service, safety, environmental stewardship and community engagement while strengthening the economic outcomes for Barbados,” said Odle.

On Tuesday, the BPI commemorated its 60th anniversary with the creation of a time capsule. Members from the organisation, along with BPI Chairman, Peter Odle, Chief Executive Officer of BPI, David Jean-Marie and Minister of Maritime Affairs and the Blue Economy, Kirk Humphrey, each placed a memento in the capsule. The contents were Barbados Port flag, Barbados Rum, commemorative pins of the Pelican II Tug (boat), the pilot launch, BPI, commemorative glow-in-the-dark essential worker dollar coin, BPI stationery pack, safety vest, mask, newspaper of the day, BPI writing pen, letter opener set, letter to future Chairman and letter to future CEO. The capsule will be opened on the Barbados Port Inc’s 75th anniversary on May 6, 2036.