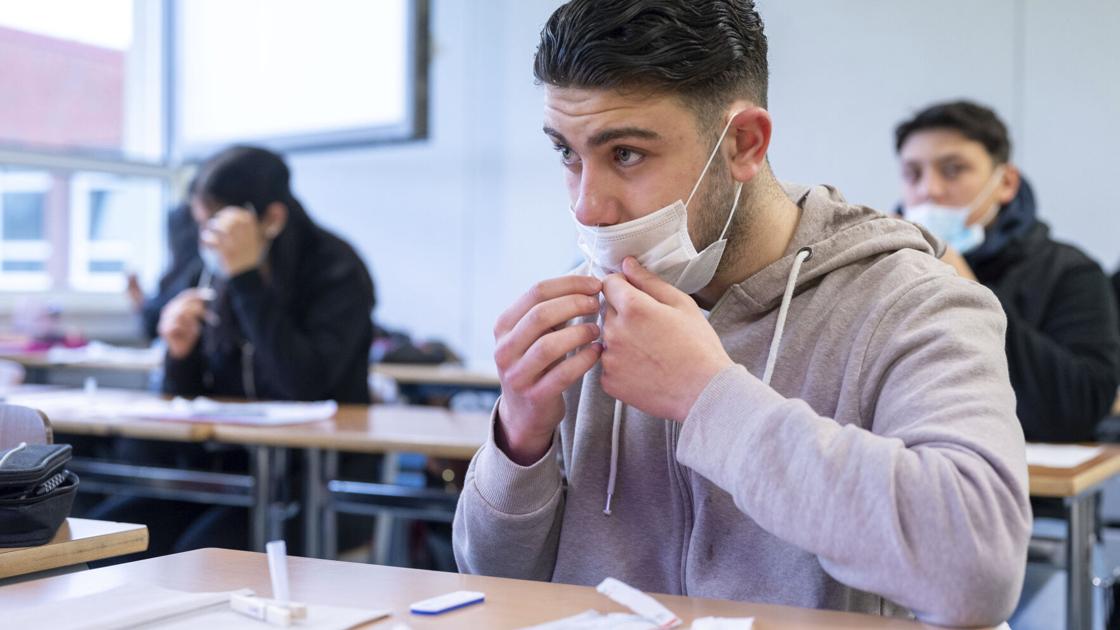 MEXICO CITY — For the first time in a year, Mexican school children have returned to classrooms — at least in the southern state of Campeche.

The Gulf coast state has been the state least affected by the pandemic in Mexico, and it was the first to get its teachers vaccinated.

So Campeche is the first, and so far the only, of Mexico’s 32 states to reopen its classrooms.

While it may have been good to get back to school Monday, the scene in Campeche was different from before: Grade-school children were allowed back in small groups to maintain social distancing, and they wore face masks and plastic face shields.

— A jab on the job: Companies, unions offer COVID-19 vaccines

— Billions spent on coronavirus fight, but what happens next?

— India’s capital to lock down amid explosive virus surge

HERE’S WHAT ELSE IS HAPPENING:

WELLINGTON, New Zealand — The Pacific nation of Fiji has closed schools and canceled sporting events as it deals with its first coronavirus infections outside quarantine cases in more than a year.

A soldier and a room cleaner at a quarantine facility have both tested positive but there hasn’t been any indication so far the virus is spreading more widely in the community.

Prime Minister Frank Bainimarama says Fiji is again facing a “grave and present danger.” The government has ordered all gyms, bars and theaters within two containment zones closed and large gatherings across the nation canceled for at least two weeks.

Home to a little under 1 million people, Fiji has recorded just two COVID-19 deaths since the pandemic began, but experts fear its health system would be ill-equipped to deal with a major outbreak.

CHARLESTON, W.Va. — West Virginia’s governor is lifting the limit on the number of people who can gather for social events and has tweaked the state’s face-covering mandate to allow people to exercise indoors without masks.

Before Monday’s action, Gov. Jim Justice had already lifted most other restrictions on businesses and public life, but he left in place a mandate for indoor mask use. Now residents engaging in physical activity at a fitness center or other indoor space can take off their masks, but are expected to wear them at all other times, such as when resting at a gym.

State figures show about 38% of residents have received at least one coronavirus vaccine dose, while 28% are fully vaccinated.

Justice has a goal of having 85% of senior citizens vaccinated. He says about 75% are partially vaccinated so far.

The Rutland Herald says Vermont state officials estimate that equates to $700 million in total losses for the economy.

The ski association says season pass holders visited the resorts more this winter, but ticket-buying skier visits were down about 40% through the end February. It says lodging revenue dropped 60% and food and beverage revenue was down 70%.

PHOENIX — Arizona’s governor has used his executive powers to ban “vaccine passports,” calling it an encroachment on the private medical information of Arizona residents.

Businesses that are contracted by the state to serve the public also cannot make such a stipulation.Private business, health care providers, child care facilities, schools and universities are exempt from the ban.

Ducey says in a statement that “while we strongly recommend all Arizonans get the COVID-19 vaccine, it’s not mandated in our state — and it never will be. Vaccination is up to each individual, not the government.”

ANCHORAGE, Alaska — Alaska prison authorities say inmates who have been fully vaccinated will be able to receive visitors starting this week.

A statement from the Department of Corrections says visitation will begin Wednesday by appointment statewide, except for at facilities in Anchorage and Ketchikan after spikes in coronavirus cases.

No physical contact will be allowed, and face masks must be worn.

Lobbies at corrections institutions will also reopen to visitors for business such as refilling prisoners’ commissary accounts. That will also be by appointment.

Corrections Commissioner Nancy Dahlstrom says the pandemic has been challenging “and we appreciate everyone’s patience and flexibility as we gradually restore our facilities to their pre-COVID operations.”

NEW HAVEN, Conn. — Yale has joined a growing list of universities that are requiring students to be vaccinated against COVID-19 before returning in the fall.

The university’s president and provost made the announcement Monday in an email to the Yale community. They urged students to get their shots as soon as possible, calling inoculation “the strongest tool for preventing transmission of the virus.”

“There is abundant evidence of the vaccines’ effectiveness and growing confidence that vaccines will be widely available by early summer,” the message added.

Reasonable exceptions will be made for religious or medical reasons, and Yale will vaccinate any students in the fall who could not get access to the vaccine this summer.

The school announced Friday that Yale Health had secured enough doses for all students to receive Pfizer vaccines over the coming weeks.

MONROE, N.C. — A Walgreens pharmacy in a North Carolina town mistakenly gave a small number of people injections of saline instead of COVID-19 vaccines last month.

Company spokesperson Erin Loverher says 22 people were affected by the mix-up March 20 at the pharmacy in Monroe and were scheduled to receive their second shot over the past weekend.

Loverher says pharmacists sometimes use saline solutions during training and there is no reason to believe anyone injected was harmed.

Walgreens is investigating what went wrong, reviewing its procedures and working to prevent similar incidents from taking place in the future.

COLUMBIA, S.C. — Gov. Henry McMaster is urging South Carolina lawmakers to approve a bill barring lawsuits against businesses and other groups by people who contract COVID-19 as long as federal and state health guidelines were followed.

He says in a letter sent Monday to House members that business “should not be placed at future risk.”

The House Judiciary Committee is set to take up the measure Tuesday. It has already passed the state’s Senate. Dozens of other states have passed similar laws.

The South Carolina Chamber of Commerce calls the measure crucial to efforts “to rebuild our businesses and adapt to evolving public health guidance.”

Opponents say existing laws are sufficient for addressing the issue. They point out that earlier this year there was just one lawsuit pending in state court where someone blamed a business for their illness.

MADRID — The official in charge of Spain’s pandemic response says a mix of prevention measures and the rollout of vaccines has for now kept a recent surge in cases from spiraling out of control.

Spain on Monday recorded 21,000 new cases and 121 confirmed deaths since the health ministry’s last update of data on Friday.

One out of five of residents have received at least one shot of a COVID-19 vaccine, and over 7% of the population have been fully vaccinated.

Spanish health authorities are conducting a study of the effects of mixing different vaccines, with results expected in four weeks.

BALTIMORE — A key contract manufacturer for Johnson & Johnson’s COVID-19 vaccine has stopped making bulk vaccine substance and is retaining what’s already been made at its Baltimore Bayview factory while U.S. regulators continue inspecting it due to quality problems.

The news was disclosed Monday in a Securities and Exchange Commission filing. It raises questions about whether problems at the Emergent BioSolutions Inc. factory will prevent Johnson & Johnson from meeting its U.S. supply commitments.

Johnson & Johnson says it remains committed to providing 100 million doses of the single-shot vaccine pledged by the end of June. It says “it is premature to speculate on any potential impact this could have on the timing of our vaccine deliveries.”

Emergent says the U.S. Food and Drug Administration began inspecting the factory April 12 and four days later asked Emergent not to resume manufacturing and to quarantine all vaccine material already produced there. Emergent said it is doing so until the inspection is complete and the company addresses any problems found.

Johnson & Johnson disclosed on March 31 that it had to throw out a batch of bulk vaccine manufactured at the Emergent plant because it didn’t meet quality standards.

ANKARA, Turkey — Deaths from COVID-19 in Turkey have reached a new daily high.

President Recep Tayyip Erdogan imposed a partial lockdown April 13, including an extended evening curfew on weekdays, a return to online education and a ban on unnecessary intercity travel. He has said the government will consider stricter measures if infection and death rates do not fall.

The Health Ministry has attributed the rising numbers on the faster-spreading coronavirus variants.

Turkey began making COVID-19 vaccines available for all people 55 and older as of Monday.

So far, 20 million people in the country of 84 million have received at least one of dose of COVID-19 vaccines.

THE HAGUE, Netherlands — A major coronavirus test event, a music festival with a planned crowd of 10,000, has been scrapped after a Dutch city denied organizers a permit.

Breda Mayor Paul Depla says in a statement that Monday’s decision came after police picked up signals that opponents and supporters of lockdown measures could be drawn to the event “with all the risks that that entails.”

Tens of thousands of people had signed an online petition opposing the 538 Oranjedag festival, which was scheduled for Saturday.

The petition was started by a doctor at a Breda hospital that was swamped with COVID-19 patients early in the pandemic and is located about 400 yards (meters) from the planned festival’s site. It called the event “a slap in the face” for hospital staff.

The festival was intended as one of a series of government-backed test events to evaluate how society can safely reopen.

The seven-day rolling average of daily new cases in the Netherlands has risen slightly over the past two weeks, but the government is considering allowing cafes to reopen outdoor terraces under strict conditions.

The Swedish teen who inspired the Fridays for Future environmental movement cites estimates that one in four people in high-income countries have received coronavirus vaccines, compared with one in 500 in middle- and lower-income countries.

Thunberg says it is “completely unethical that high-income countries are now vaccinating young and healthy people if that happens at the expense of people in risk groups and on the front lines in low- and middle-income countries.”

Thunberg is directing 100,000 euros (about $120,000) from her charitable foundation to the WHO Foundation to help supply COVID-19 vaccines where they are sorely needed.

The World Health Organization has announced 5.2 million new confirmed cases of the coronavirus over the last week, a new high.

Director-general Tedros Adhanom Ghebreyesus says infections among people between 25 and 59 years old are “increasing at an alarming rate, possibly as a result of highly variants and increased social mixing among younger adults.”

NEW DELHI — The Indian capital has imposed a weeklong lockdown seeking to prevent the collapse of the city’s health system, which authorities say has been pushed to its limit amid an explosive surge in coronavirus cases.

To combat the crisis, India announced that it would soon expand its vaccination campaign to everyone 18 and older starting May 1.

India began vaccinating health workers in mid-January and later extended the drive to people above 45 in two phases. The country has so far administered 120 million doses.

India reported 273,810 new infections, the most it has seen in a single day since the pandemic began. It now has more than 15 million confirmed cases, second only to the United States.

Success! An email has been sent with a link to confirm list signup.

Error! There was an error processing your request.