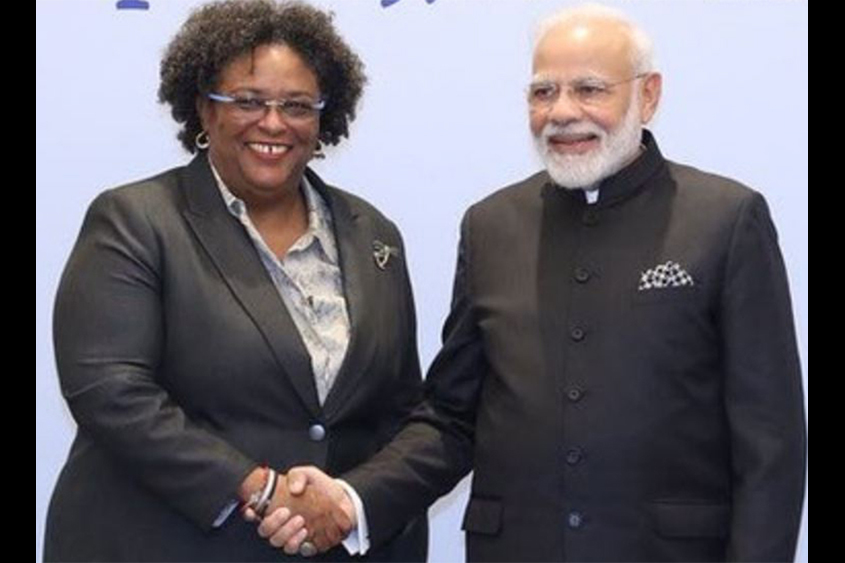 India’s Prime Minister Narendra Modi on Thursday acknowledged the “special friendship” which exists with Barbados, after supplying the island with its first donation of the Oxford-AstraZeneca COVID-19 vaccines.

In an exchange on Twitter, Modi responded to a tweet from Prime Minister Mia Mottley sent the previous day.

“Thank you PM @miaamormottley. Special friendship between our nations has always helped us bridge geographic distances. #VaccineMaitri is proud to support the vaccination efforts of Barbados and other CARICOM countries,” he tweeted.

On Wednesday, Mottley wrote: “PM Modi @narendramodi made it possible for more than 40K persons in Barbados and tens of thousands elsewhere, to receive their 1st dose of COVISHIELD via #VaccineMaitri before receiving his. A genuine demonstration of generosity. Thank you and we wish you continued good health.”

Thank you PM @miaamormottley. Special friendship between our nations has always helped us bridge geographic distances. #VaccineMaitri is proud to support vaccination efforts of Barbados and other CARICOM countries. https://t.co/8w3KytQpqu

Last month, India donated 100 000 doses of the Covishield vaccine to Barbados – some of which was in turn shared with Caribbean neighbours. Dominica also received 70 000 in the same shipment.

In thanking Modi at the time, Mottley also acknowledged the historic ties between the two countries, saying India was one of the first to recognise Barbados as an independent nation and donated furniture which is still being used in Parliament today.

“And, what may not be known either by Barbadians or Indians, 55 years almost later, is that the very chair, the very ornate and magnificent chair in which our Speaker sits in our Parliament – which  as you know is the third oldest Parliament in the Commonwealth – was given to us by the Government and people of India,” Mottley said.

“It wasn’t only the Speaker’s chair that was given to us on Independence, but it is also the Cabinet table in our Cabinet room that was also given to us by the Government and People of India. So, in a very real sense, the contribution of the people of India towards Barbados’ stability and democracy has been consistent over the 55 years that we will celebrate in November of this year.”

India, a world pharmacy, is at the forefront of the fight against Covid-19 and is emerging as a key supplier of vaccines to over 70 countries on a commercial and humanitarian basis. India has so far supplied 46.10 million doses of coronavirus vaccine globally, according to the Ministry of External Affairs. (PR/SAT)