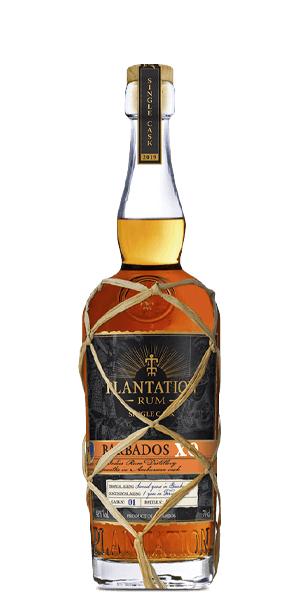 Plantation Rum is owned by French Cognac producer Maison Ferrand, who control no less than a dozen major brands of premium Spirits and Liqueurs. Ferrand is all about quality — and you can taste it. Plantation Rum is their top shelf Rum label. And mighty good stuff it is, too. They offer a variety of Rums from the Caribbean. Depending on the specific actual plantation and the country of origin, the Rums can vary between soft and aromatic to light and elegant — each one showing the experienced influence of Maison Ferrand.

Plantation Barbados XO Single Cask was released in 2019, but a few extra cases became available and we snapped them up for you. Ferrand calls this one an XO, and in this case that means that after distillation from molasses in a pot and column stills and initial aging in Barbados, it was sent to France to age an additional year in ex-Cognac casks. Then it was transferred to rare and potent South American Amburana casks for another six months and bottled at 48% ABV. It is a strong and floral dram with a palate of pastries and fruits.

Smartass Corner:
The Amburana is a tree — officially in the legume family — native to South America. It’s a rare species, but the wood is gaining popularity for barrel-making because it delivers an exotic spiciness and complexity to the Spirit. Some think the profile is like a cinnamon pastry.

David Harewood collapses when his ancestors meet Viscount Russell, who enslaved his family.