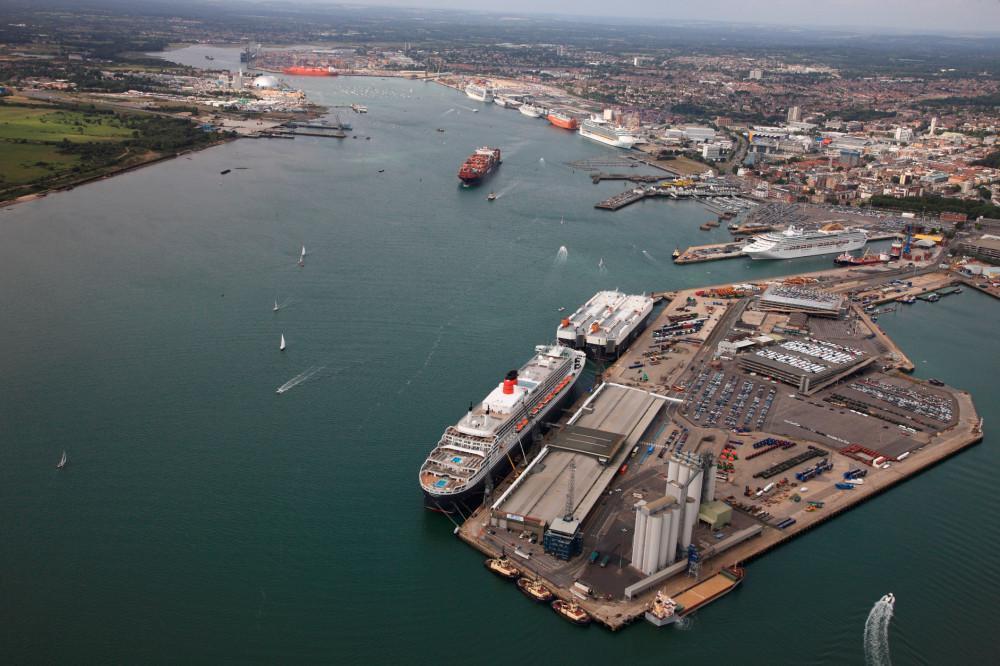 Port Southampton is UK’s largest passenger (ferry and cruise) port and 2nd largest cargo port (following Felixstowe). Its first dock was opened in 1843. Most of its operations back then were regular Transatlantic crossings between UK and USA. Since 1982, the port is owned and operated by ABP (Associated British Ports). Southampton is ranked UK’s largest cruise port and UK’s second-largest container port (after Felixstowe).

Southampton is ranked UK’s largest seaport, handling annually over GBP 40 billion of exports. The worth of its total trade is around GBP 75 billion. Southampton is also UK’s largest port for vehicle exports and home to UK’s second-largest containership terminal (after Felixstowe) handling annually around 1 million TEU-containers. The port (all its facilities) is managed by ABP (Associated British Ports Holdings Ltd) – London-headquartered corporation that owns 21 UK seaports and manages ~1/4th of the UK’s sea-shipping trade. ABP Southampton is port’s Statutory Harbour Athority, VTS Authority (vessel traffic service) and Pilotage Authority. Pilotage (vessel assistance by ABP pilots) is compulsory on arrival-channel navigation, for berthing-unberthing operations and also when the vessels shift anchorage in Southampton Harbour.

In the period 2012-2017, in port development projects were invested over GBP 280 million, including over GBP 50 million in new vehicle export facilities.

Port’s sheltered inland location and also Isle of Wight (in the English Channel) protect it from the effects of bad weather. Additional advantages are the close proximity to London City and the excellent rail / road infrastructure linking to the rest of England and bypassing the capital city’s congestion.

In late-November 2020, ABP announced that for the building of the new (11695-m2 / 125,890-ft2) cruise terminal at Berth 102 (Western Docks) is contracted Brymor Group (Portsmouth-based construction company). The new (5th) terminal will provide shore-to-ship power supply. The new terminal (via partnership with NCLH-Norwegian and MSC Cruises) received a GBP 8 million (EUR 8,9 M / USD 10,65 M) grant from the UK’s Getting Building Fund. Also in late-November 2020, MSC signed a long-term agreement with Port Southampton for preferential docking rights. The deal starts in summer 2021 with the homeporting of MSC Magnifica at the port’s newest/5th terminal. By this agreement, every year MSC has to homeport at least one ship in Southampton. For 2021, MSC scheduled for Magnifica 21 roundtrips from Southampton, including to the Mediterranean, mini-cruises to Northern Europe and 7-days to Norway’s Fjords.

After receiving a GBP 7 million government grant, in 2020, ABP Southampton introduced shoreside power connectivity for cruise vessels. The shore-to-ship power (aka cold ironing) enables docked vessels to receive electricity from the city’s power grid. From the berth, vessels can plug-in directly to the grid for full onboard operations without using their diesel engines (or gas turbines) which are shut down right after berthing.

For season 2018, MSC Cruises scheduled an extended itinerary program with more regular departures from the UK. The company intends to homeport here one of its newer (bigger) ships.

For 2017, the cruise port reported a record-breaking year with over 2 million cruise passengers. It is estimated that every visiting cruise ship brings around GBP 2 million to the city’s economy. In 2017 the port received over 500 passenger ship calls. The busiest long weekend (15 cruise ships) was in June.

On May 21, 2016, RCI-Royal Caribbean International and the port authority ABP signed a GBP 5,5 million deal. It secures City Cruise Terminal (Berth 101) as the Royal Caribbean’s official UK cruise departure port for the period 2016-2023. The Southampton cruise port’s contribution to the UK economy is 15,000 cruise ship related jobs and over GBP 1 billion economic impact. On April 11, 2016, the new RCI ship Ovation of the Seas arrived and docked at Berth 101 (City Cruise Terminal, Western Docks). The ship stayed for a few days in Southampton before the repositioning cruise (53-days “Global Odyssey” itinerary) ending in port Tianjin-Beijing China.

On April 20, 2015, the RCI-Royal Caribbean ship Anthem of the Seas was officially named in Southampton. The christening ceremony was led by the godmother Emma Wilby (British travel agent). On May 3, 2015, Cunard Line’s 175th Anniversary Celebrations were held in the cruise port. The special event was attended by all three Cunard liners – Queen Mary 2, Queen Elizabeth and Queen Victoria. The three ships left the port together on their scheduled itineraries, en-route to, respectively, NYC New York, Hamburg and Guernsey (Channel Islands).

In late-March 2014, RCI announced that Explorer of the Seas will be deployed in Europe and homeported in Southampton for summer 2015 (April through September). The list of roundtrips included 3- and 8-night Baltic Sea, 11- to 16-night Mediterranean and 10- to 14-night Madeira, Canary Islands and Azores.

(statistics) In 2013, the cruise port handled around 1,7 million passengers. In 2011 were handled nearly 1,5 million passengers (11% increase over 2010). Each cruise ship call in Port Southampton generates an economic impact of about GBP 2,5 million.

Cruise itineraries to and from Southampton England

Follows a list of destinations visited by cruise ships leaving out of Southampton: