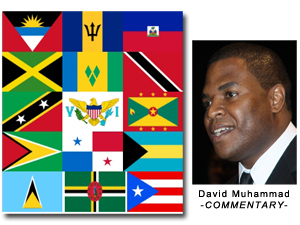 The history of U.S. imperialism in Caribbean

What’s your opinion on this article?

(FinalCall.com) – U.S. imperialist entities have always been interested in maintaining power in the Caribbean, and many of these imperialists have sought to redefine the Caribbean based on its importance to the so-called first world.

After the American Civil War the United States went into a period of isolation. By the 1880s, however, the U.S. had advanced in its internal development until there was nowhere left to expand. Industrial and agricultural output had outgrown the ability of her citizens to consume American products as a result of free African labour. So there was “political expansionism” whereby America sought to redefine her sphere of influence, colonise and police nearby countries. The Caribbean was the ideal region for a ready consumer market and haven for overseas Americanism. In the 1890s, the U.S. revived the idea of “Manifest Destiny,” “The American Way” and “The American Dream.” Captain Alfred Mahan in 1890 advocated doctrines of “White supremacy” and “the new national mission” of spreading America’s wings overseas.

A number of plans were drafted in the U.S. with the Caribbean in mind as Britain had begun slowly withdrawing from the region.

Beginning in the 1860s British policymakers began arguing UK influence should be more commercial than military, and the Brits began closing army and navy bases. By the 1890s the only real British military garrisons in the region were in Jamaica, Bermuda and Antigua.

Two significant events began to create space for America in the Caribbean: A border dispute between Venezuela and British Guiana over the discovery of gold which U.S. President Cleveland urged Britain to settle with arbitration, and hinted that if they did not the U.S. would fight alongside Venezuela and a 1895 war in Cuba based on conflict in Spain. This disrupted the Cuban economy and caused U.S. financial interests and investments in Cuba to suffer. By 1898 America was convinced the Caribbean was of strategic vital interest to the U.S. America decided to construct the Panama Canal. A U.S. ship was blown up in Havana which caused America to declare war against Spain, and the U.S. won. The American army ruled Cuba for four years after 1898.

Both of these events were influenced by a philosophy known as the “Monroe Doctrine,” established by the 5th U.S. President James Monroe (1758-1831). He stated December 2, 1823 that the United States would no longer allow European political interference in America’s backyard. President Monroe declared: The Western Hemisphere was closed to further European colonization. The U.S. would not interfere with the existing colonies of Europeans, nor interfere in the internal affairs of any Europeans, he said. But any attempt by the European powers to intervene in the Western Hemisphere would be regarded as “dangerous to U.S. peace and safety.” The Monroe philosophy remains as a major guiding principle for current U.S. foreign policy.

In 1900 “The Platt Amendment” was established and gave the U.S. control over Cuba’s destiny, which included the right to naval bases at Guantanamo Bay.

In 1903 Colombia was reconsidering an earlier agreement on the Panama Canal. President Roosevelt declared Colombia must not block this “important highway to civilization.” So in 1903 a revolt in Panama saw American warships preventing Colombian warships from coming into the area. The result was a coup and a new government sanctioned by America. Twelve days later this new “rebel regime” (which overthrew a legitimate democracy) granted the U.S. a perpetual lease to the contested area. America next established the Roosevelt Corollary policy which declared America would act as international policeman in the region. In 1904 the U.S. intervened in the Dominican Republic to make it pay debts and ensure no European power could come in the region. In 1906, following a Cuban election, the U.S. intervened and occupied the island for three years. In 1909 the U.S. withdrew and President Roosevelt said “if bad behaviour continued Cuba would lose their independence.” America intervened again in 1917.

In 1914 U.S. entered the Dominican Republic to supervise new elections, and in 1915 under President Wilson interfered in Haiti due to alleged “instability of the government” and forced Haitians to sign a treaty which allowed repayment of national debt through borrowing huge sums from the U.S. This gave America control over Haiti’s finances and police and made Haiti an “American protectorate.” By 1928 the U.S. abandoned the Roosevelt Corollary and in 1930 adopted the “good neighbor” policy instead of “the big stick” policy.

By the time World War II ended in 1945 the Caribbean was secure under the wing of America.

U.S. imperialism has continued in the region even after independence and remains as a ghost that takes credibility away from the concept of true Caribbean independence.

(David Muhammad is the Trinidad Representative of Minister Louis Farrakhan and the Nation of Islam. Listen live to his “Black Agenda” radio program Mondays and Thursdays 8 p.m.-10 p.m. ET on www.wackradio901fm.com.)