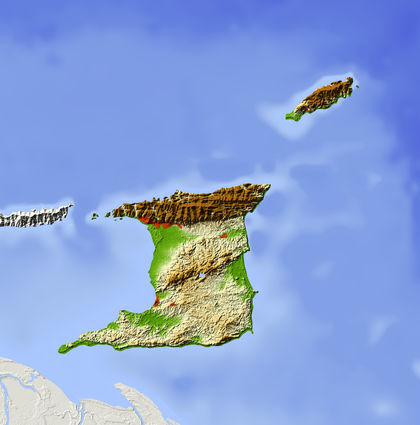 Republic of Trinidad and Tobago

Trinidad and Tobago’s population was estimated at 1,175,523 in July 2000, declining 0.49 percent from the previous year and below the mid-1996 estimate of 1,263,600. The decline can mostly be explained by a relatively high level of emigration , estimated at 9.92 persons per 1,000 population in 2000. Most Trinidadians emigrate to the United States or Canada in search of better work opportunities and higher wage levels than those available at home. Because of emigration and government-sponsored birth control programs, the population is expected to decline to about 1.11 million by 2010.

Trinidad and Tobago has one of the most ethnically diverse populations in the Caribbean. According to the 1990 government census (the most recent available), 40.3 percent of the people are of “East Indian” descent. The “East Indians” are descended from indentured laborers brought to Trinidad in the second half of the 19th century to work on sugar plantations. Some 39.5 percent define themselves as of African descent, while 18.4 percent are classified as “mixed.” There are significant communities of Chinese, Middle Eastern, Portuguese, and people of other European descent. The East Indian population tends to be more evenly distributed throughout rural areas, while the African-descended population is more urban in character. About one-half of the population lives in an urbanized east-west corridor stretching from Diego Martin in the west to Arima in the east.

Petroleum has dominated the economy since the 1950s, when offshore production began. In 1999, there were 18 international companies involved in oil and gas exploration and production, while the state-owned Petroleum Company of Trinidad and Tobago (Petrotrin) was involved in extraction and refining at its refinery at Pointe-á-Pierre. The oil and gas sectors are divided between foreign and national companies, the former paying the government a royalty on all oil and gas produced. In the 1990s, production of refined petroleum averaged 125,000 barrels per day. This increased in 1999-2000 when world crude oil prices rose from US$11.64 per barrel in early 1999 to US$17.37 6 months later. In 1998, total oil-related exports, including crude oil, refined petrol, and gas, earned just over $1 billion, but this was expected to rise from 1999 onwards.

Trinidad and Tobago’s oil and gas industry appears to have many years ahead of it, with proven reserves of oil standing at 605 million barrels in 1999 (with possible reserves estimated at 2.6 billion barrels) and gas reserves standing at 22.9 billion cubic feet, enough to last 51 years at current rates of extraction. Recent findings have suggested that there may be even greater reserves of gas and oil off the shores of Trinidad. A relatively small amount of Trinidad’s gas is exported, and most is used in other sectors of industry.

Trinidad and Tobago’s manufacturing sector is very different from that of other Caribbean countries in that it does not depend on cheap labor or the export of garments and electronics into the United States. Instead, the emphasis is on heavy industry and petro-chemicals, all related to bountiful natural resources. Unlike other smaller Caribbean countries, Trinidad and Tobago is home to several large local companies, producing a wide range of consumer goods for national and regional markets. Manufacturing depends to a large degree on the availability of cheap fuel. In 1999, about 65 percent of the gas produced by the National Gas Company went towards producing ammonia and methanol, which in 1998 earned US$248 million and US$148 million, respectively. In 2000, Trinidad and Tobago became the world’s largest exporter of methanol, a liquid used as a solvent or fuel, while it was also the world’s leading exporter of ammonia, a gas used in industry. Locally produced gas also fuels the steel and cement industries; in 1998, Trinidad and Tobago earned US$206 million from steel exports. Cement, glass, and food and drink processing also benefit from cheap energy supplies.

Tobago has a significant tourism industry, with more than half of the country’s 4,200 hotel rooms situated on the smaller island. But in energy-rich Trinidad, tourism has not been considered a priority, and most visitors come as business travelers or to visit relatives. The exception is the annual Carnival in February, when many thousands of tourists arrive to witness the famous calypso and steel band music and the colorful marches. In 1998, receipts from tourism amounted to US$201 million, with an estimated one-third of tourists arriving from the United States. Since the 1990s, the government has shown greater interest in tourism’s potential and has invested in a cruise-ship terminal at Port of Spain and more international marketing. In 1999, cruise-ship arrivals rose significantly, reaching over 65,000.

Retail is well developed in Trinidad and Tobago, with several large distributors, wholesalers, and supermarket chains. There are also many small local stores, especially in the countryside.

Trinidad and Tobago has no territories or colonies.

Government of the Republic of Trinidad & Tobago. . Accessed July 2001.

“Trinidad and Tobago and the IMF.” International Monetary Fund. . Accessed May 2001.