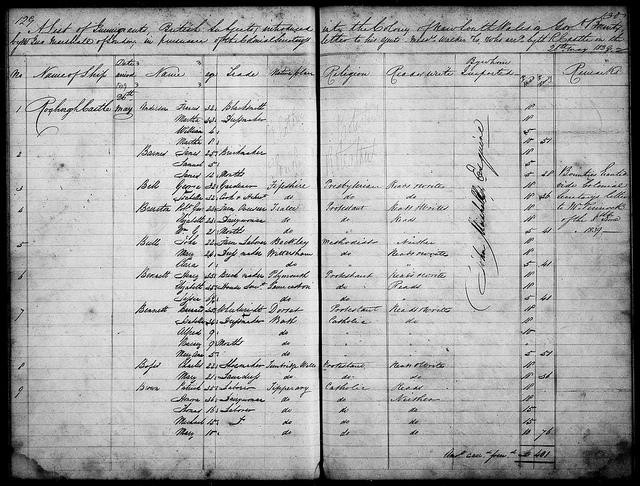 Browse through digital shipping lists from 1828-1896

Note: numbers in square brackets [] indicate the order that a ship with the same name appears within a volume.

Note: numbers in square brackets [] indicate the order that a ship with the same name appears within a volume.

These passenger lists can be found on microfilm reels 2134-2145. If you find an assisted immigrant entry in the online indexes you may find them in these digitised shipping lists. The digital copies here are reference copies only, if you wish to purchase higher resolution copies please contact us for advice.

The aim of this pilot project was to test the feasibility of large scale digitisation from microfilm. The microfilm reels were scanned at 400dpi, however the web image is a derivative of this master copy. As a result of the reduction process to make the images easier to download we are aware that there may be problems with the image quality of some of the lists. Furthermore, in some cases the quality of the original record is often quite poor, further affecting the quality of the microfilm and subsequent digital copy. We are looking at ways of overcoming the variable quality of the digital copies. If you are experiencing difficulty in reading one of the lists please email us and we will see if there is any way we can improve the image quality of that list. Alternatively many of the records listed above are widely available in many public libraries around NSW as part of the Archives Resources Kit. Digital copies of  many of the passenger lists are also available on the www.ancestry.com.au website.

What is not included?

Please note: A number of immigrants arrived in the colony under various special non-Government assistance schemes, Mr Sidney Herbert’s needlewomen (the Female Emigration Society) and initiatives to bring German immigrants to the colony. As the records of these arrivals are not included in the microfilm copies of the Agent’s lists (NRS 5316), the first stage of our ‘Online’ microfilm of shipping lists project, they have not been digitised.

Microfilm copies of NRS 5317 Persons on bounty ships to Sydney, Newcastle and Moreton Bay (Board’s Immigrant Lists), which do include the lists of the arrival of most of these groups, are available in our reading room and at our 40 community access points. In the longer term digital copies of these records will be added to our ‘Online’ microfilm of shipping lists and will become available on our website.

Additional information may possibly be located in NRS 5314 Entitlement certificates of persons on bounty ships, 1832-42. Each certificate records the name of the ship and the ship’s agent; and the native place, calling, age, health, religion and name of the immigrant. Each is endorsed with a character reference and a certificate of baptism.

THE DEMAND FOR FREIGHT TRANSPORTATION: MODELS AND APPLICATIONS