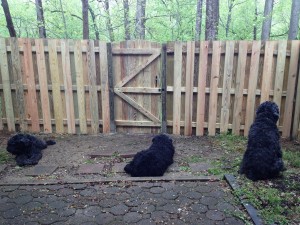 This  blog post is based on the shipment of three Bouvier Des Flandres dogs from two different litters which were bred by me and were owned by one of my friends who returned to the USA.  She lived in Barbados for approximately 14 years and the oldest of the Bouviers was 8 years old at the time of the shipping.

These Bouviers went to an extremely good home and were always well cared and loved by her. I am, of course, delighted that she did not leave them behind when she returned to the USA.

I know of people from overseas who have imported pedigree dogs or bought puppies on the island and when they leave, they leave the dog behind.

On the other hand and on the positive side, I do know of other people who became attached to their dog, sometimes even a mixed breed dog, maybe a rescued dog or a dog they met on the beach, and they cared for the dog and took the dog home with them.

It is expensive to export dogs to the USA from Barbados, especially large size adult dogs as the freight costs are based on the weight of the dogs and Bouviers are large dogs.

To export a dog, the first place to check is with our Government Veterinary Department. Their office is located at the Pine, St. Michael. Check here to ship dogs out of Barbados and talk with one of the vets listed there. I recommend making an appointment and sitting and talking with the vet.

What is needed is a Veterinary Health Export Certificate issued by that department. The Bouviers also had a rabies inoculation which was done by a private vet and they were also treated by a private vet for ticks and worms. Barbados is regarded as a rabies free country so our dogs are not inoculated against rabies in Barbados but it is sensible to vaccinate travelling to the USA and especially living near a wooded area.  The rabies vaccination was done and also the dogs were tested as part of these health documentation.

To travel, dogs also need to be micro chipped and this should be done at a private vet with the owner of the dogs taking them back to ensure that the microchips are reading correctly. It is very important that these procedures are followed. What the dogs are receiving is a signed and stamped Health Certificate so it is important, besides talking with our Government vets, to also talk to a private vet.

It is very important that all documentation be correct.  I recommend sending the original documents with the dog (taped to the crate) after being checked off by the broker and also carrying a duplicate with you.  A dog without its proper documentation can be placed in quarantine and/or be refused entry.  The airline will notify a Government vet to check and inspect the dog on arrival.  It is better, always, to ship on week days when the Government vets are on duty and not have to bring one out on overtime and maybe from his family dinner!

We checked with the pet shops on the island for suitable crates, and we were looking for the extra large size.  Only one place had that size and it was very expensive.  We ended up with asking Do it Best, a hardware store, in Sheraton Mall, to order the crates. Sometimes airlines do have crates available so it makes sense to check American Airlines and other airlines to see whether a crate could be readily available.  Likewise to check within the local dog community to see whether any large size dogs were recently imported to the island and whether those crates would be available.  Do it Best’s service was reliable.  These crates must also be the ones approved for airline travel. The bowls for water and sticker signs for the crates were purchased separately from an online USA company. Although Seawell  Air Services will provide stickers for the crate like “live animal”, it makes sense to ensure you have some and also the water bowls to be attached to the crate.

The airlines travelling from Barbados to the USA were checked and it is very important to note that airlines in the USA may restrict the travel of dogs from Barbados and other places to the USA to the time frame, May 15 to September 15, which is regarded as the cooler and safer months for dog travelling.  A broker could advise of shipping conditions.

There is no quarantine required for dogs shipped to the USA providing that the health requirements for entry have been complied with and documented by the relevant officials.

At one time, dogs could travel as baggage to several parts of the world.  However, we were told these dogs would have to go as freight.  I believe Canada is one of the places where dogs from Barbados can still travel as baggage which works out much cheaper.

To ship the dogs from Barbados, a broker is needed as paper work is necessary.  We took the dogs and a crate to Seawell Air Services, the major broker, which is in the industrial park by Grantley Adams Airport.  The personnel there need to  approve the crates before hand and the largest Bouvier was put in the crate for preapproval.  It is important that the crate has enough room for the dog to turn around and also to stand.

Payment has to be made before the shipment arrangements are made and it includes our vat tax of 17.5 percent on all charges.  And horror of horrors, Seawell Air Services did not accept credit cards and required a banker’s certified cheque!

Dogs which have never been crated cannot be expected to be co-operative and just go into crates the day they are to be shipped.  So what we did was this:  introduce the Bouviers to the crate bottom (the top part was not attached) and give them food in the bottom part.  A few days later, we attached the top part of the crate and offered food in the crate.  The Bouviers learnt to like going in their crates as it meant treats and/or food.  And they had a few weeks of getting accustomed to the crates.  The doors were also shut and they were okay with that as well. It is important to train dogs travelling to accept going into a crate.

Some hic cups along the way were:  getting to Seawell Air Services for them to approve the crates and they measured the largest (tallest Bouvier) and said the extra large crate we had was too small!  It was shown through my cutting more coat off the largest Bouvier that the crate was suitable and the day they were shipped I had their coats well trimmed to avoid any possible crate problems.

The dogs have to be taken to their Barbados departure area about an hour before the travelling person has to be at the airport.  A hic cup was that the plane was delayed so Seawell Air Services suggested that the dogs be fed and walked. These Bouviers sniffed the dog chow that was purchased from a nearby supermarket and did not touch the food as they are accustomed to having all kinds of meats with their chow!

The dogs also had to overnight in Miami and their owner got to see them and speak to them before travelling to her next USA destination. She said she could hear them barking from their cargo section in the plane!  And the airline personnel did announce that the barking heard was indeed dogs travelling from Barbados to the U.S.A. with their owner to which some passengers clapped and cheered!

All in all, an expensive operation which also took time and planning and maybe one which, if the person, is not truly a dog lover and maybe does not have the money for the expense, will mean that the person will leave the dog behind. The approximate cost was BDS. $14,000.  (BDS $ = BDS. $2 to USA$1)

These Bouviers from Barbados currently live in a townhouse, next to a wooded area and a stream.  They are walked several times a day and their owner recently received permission to build a small fenced area around the back area of the townhouse so they can enjoy the sunshine outside as well as from the upstairs deck.  They seemed to enjoy their first snow fall very much.  On the upstairs deck, they enjoy seeing the squirrels and other animals. On their walks, the owner tells me that they are petted and loved in the area.  And the pet sitters when they are brought in are happy with them.  They have now enjoyed their first mild winter and are settled in the USA where they do not seem to get the tick problems as in Barbados.

She says that, of course, they miss their Bajan family and their freedom of a large fenced area in Barbados.