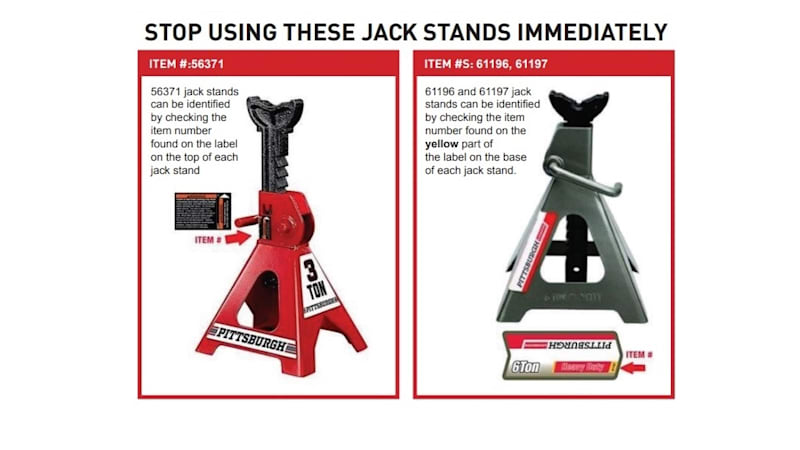 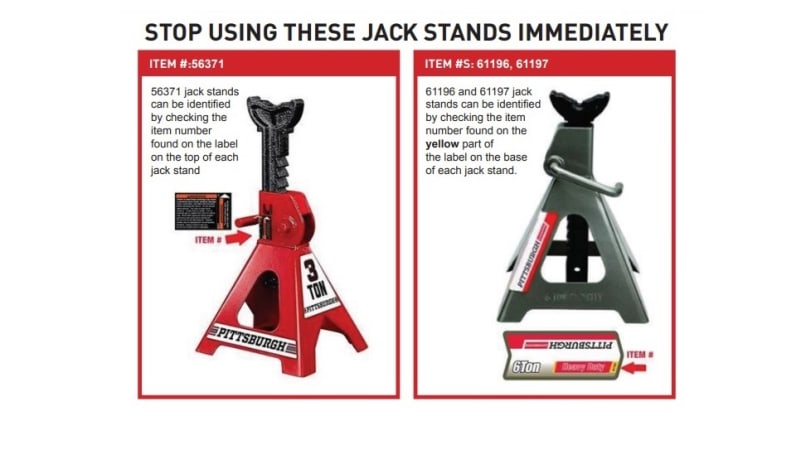 Harbor Freight is recalling over 1.7 million Pittsburgh-branded jack stands that can suddenly collapse due to a manufacturing flaw. It warned its customers that they need to stop using the defective stands immediately.

The recall campaign includes three- and six-ton stands wearing item numbers 56371, 61196 or 61197. The number is found on the label that’s normally affixed to the top or the base of the stand depending on the model; it should be clearly legible. Harbor Freight told the National Highway Traffic Safety Administration (NHTSA) it realized the tooling used to make the stands near Hangzhou, China, had become worn out due to age and was manufacturing inconsistent parts. As a result, the ratchet teeth might not be deep enough to hold the lifting extension in place if a shift in weight occurs, like when you’re banging on a rusty brake drum with a mallet, and the stand could collapse without warning. That’s bad news if you’re under it, working on a 4,700-pound SUV.

There’s no word yet on whether any injuries or deaths are blamed on the defect. There is also no word on whether the stands, manufactured by a supplier named Jiaxing Golden Roc Tools Co., Ltd., (and exported by Shanghai Shen Da Import and Export Co Ltd.), might have been sold by other retailers.

Separate NHTSA documents reveal the recall includes 1,254,000 three-ton stands and 454,000 six-ton stands, though only about 5% of each type are potentially defective. Alarmingly, the defective three-ton stands were manufactured between December 1, 2012, and March 31, 2020, while the six-ton units were made between June 13, 2013, and November 22, 2019. “Although we believe this issue arose in more recent production batches, because we are not able to confirm that earlier production units do not have this issue, out of an abundance of caution we are recalling all units prior to the recall date,” the company wrote in a statement sent to regulators.

Owners of defective jack stands are being urged not to use them, and to return them to their nearest Harbor Freight location when possible, though shut-downs and stay-at-home orders are adding an unusual degree of complication to this campaign. Customers will receive a gift card for the amount of a set of comparable stands.

Harbor Freight added it’s in the process of evaluating jack stands it sourced from other suppliers to ensure they’re safe, though the COVID-19 outbreak has slowed its progress. It said it hasn’t received customer complaints about other products, but it will update the report it sent the NHTSA after it concludes its investigation.